To share your memory on the wall of Khoren Arisian, sign in using one of the following options:

Khoren, always a fierce defender of our democracy, courageously spoke out against McCarthyism, marched in Selma, co-founded the New York Society's Prison Reform Task Force, co-founded the Humanist Institute for new humanist leaders, spoke out for LBGT rights, and created New York Society of Ethical Culture's public political forums before and during the Iraq war. From the pulpit he was a classic preacher with a powerful voice that intertwined research information with elegant prose that inspired us to be our best selves. Khoren published hundreds of articles, edited professional journals, and wrote the well=known book, The New Wedding.

He leaves us wishing for another honest conversation full of wit, kindness and awe of all things beautiful...and of course a pint of Guinness. Our beloved Khoren is survived by his wife, Leigh McKay; his sons, Christopher Arisian and Derek Arisian (Silvia Arisian); his step-daughters Megan Elliott (Eddie Elliott) and Amy McDaid (Richie McDaid); his grandchildren, Sofia, Serena, Veronica, and GianLuca Arisian, Natasha and Aidan Arisian, Levi Elliott, and Finn McDaid and his brother, Rodney Arisian.
Read Less

To plant a memorial tree in honor of Khoren Arisian, please visit our Heartfelt Sympathies Store.

There are no events scheduled. You can still show your support by sending flowers directly to the family, or planting a memorial tree in memory of Khoren Arisian.
Plant a Tree

We encourage you to share your most beloved memories of Khoren here, so that the family and other loved ones can always see it. You can upload cherished photographs, or share your favorite stories, and can even comment on those shared by others.

Posted Feb 09, 2021 at 03:02pm
Khoren was the first UU minister I met. I immediately joined FUS and deeply appreciated his preaching. This year I celebrate the 25th anniversary of my own ordination. I think of Khoren with much gratitude.

Flowers were purchased and a memorial tree planted for the family of Khoren Arisian.

Posted Jan 18, 2021 at 12:31pm
We have lived next door to Khoren and Leigh for almost 15 years. We will miss his smile, intellectual opinions, love of cars and warm greeting whenever we saw him. It has been an honor to know him. Rest in peace good friend and neighbor
Comment Share
Share via:
H

Posted Jan 18, 2021 at 12:05pm
We have lived next door to Khoren and Leigh for almost 15 years. We will miss his smile, intellectual opinions, love of cars and warm greeting whenever we saw him. It has been an honor to know him. Rest in peace good friend and neighbor 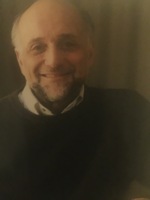