To share your memory on the wall of Ronald Thoresz, sign in using one of the following options:

Born and raised in New Brunswick, New Jersey, in the shadow of Old Queens, Ron was a life-long Rutgers football fan. Tailgating prior to home games was a many decades long family tradition. He was a graduate of Parsons College Fairfield Iowa where he majored in Business Administration. He also served in the 6th U.S. Army as a Military Policeman from 1969 to 1971 and received the National Defense Service Medal. One of Ron’s interesting memories of his time as an MP was when he was working security when Jane Fonda came to protest. Ron’s work career spanned time at American Cyanamid, Mercedes-Benz, and finally FedEx and regardless of employer, Ron was always well liked and appreciated for his down-to-earth and humble nature. He was known as a jester of jokes, trivia, one-liners and short (and long) stories.

Ron was an avid sportsman who could punt a football 70 yards, bowl 300 games, hold his own in Pro-Am golf tournaments and fish with the best of them. Ron is also a Fantasy Baseball Member Emeritus where his Commissioner is naming the pennant winner in his honor.

Ron met Jamie when he worked at Cyanamid where he would frequently visit her office to chat. It took him four months to ask her out which, due to a well-timed prompt from Jamie saying she had no one with whom to play golf, Ron quickly said, “I’ll play with you”. That was two years prior to the beginning of their 47-year marriage. Over those years they spent many a spring golfing in Hilton Head and Myrtle Beach, and well as traveling to Kansas City to visit family and watch the Royals. One of their vacation highlights was traveling to La Costa when Ron played in the Mercedes Pro-Am Tournament.

An imposing 6’4”, Ron was every bit a gentle giant. Friends and family knew him as a man whose kindness and generosity knew no bounds. What tells it best was his relationship with squirrels and chipmunks in his backyard. He loved to feed them and he could be seen with the furry creatures gathered around with a chipmunk perched on Ron’s feet looking up at him as he tossed peanuts. Ron was indeed a kind man.

Ron is survived by his wife Jamie Mastrich Thoresz. Jamie and Ron were inseparable. Ron is also survived by Jamie’s brother and sister-in-law Jim Mastrich and Kathryn Hall and their two sons Zachary and Devin Mastrich.

In lieu of flowers, Ron's family has requested that donation in his memory be made to Samaritan Hospice, 3906 Church Rd., Mt. Laurel, NJ 08054 ( SamaritanNJ.org ).
Read Less

To send flowers to the family or plant a tree in memory of Ronald Wayne Thoresz, please visit our Heartfelt Sympathies Store.

We encourage you to share your most beloved memories of Ronald here, so that the family and other loved ones can always see it. You can upload cherished photographs, or share your favorite stories, and can even comment on those shared by others.

Posted Feb 14, 2021 at 12:15pm
I knew Ron for over 25 years as he used to come into my baseball card shop and we would talk sports for hours. He was a big San Francisco Giants fan and was a founding member of the Greg & Doogie's Fantasy Baseball League where he named his team Thor's Giants. That was an imposing name if ever there was one. My favorite day of the year is the day of our fantasy baseball league draft and then getting Ron's take on our respective teams as we rehashed the draft. He always had a smart take on things and we always had a good natured side bet on our teams too. The league won't be the same without him. May he rest in peace!

...many, many thanks, Greg, for sharing those memories; you and Ron would be on the phone a long time prior to the draft; I remember it well!! Warm regards, Jamie
NF

...thank you, Nancy, for sharing that memory and for my hugs and prayers. Warm regards, Jamie 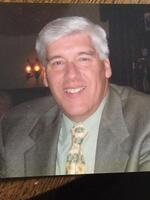 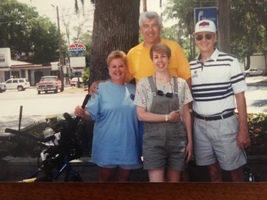 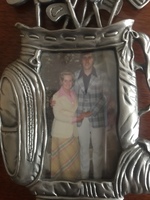 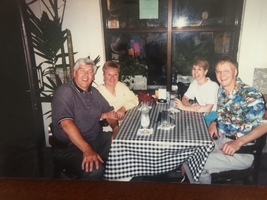