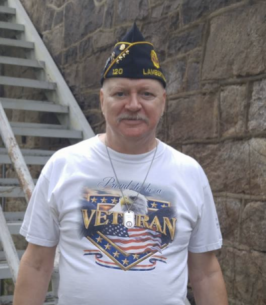 Edward C. Rinkus of Lambertville, NJ, died on Wednesday, April 27, 2022 at Capital Health in Hopewell, NJ. He was 72.
Born in Trenton, Ed lived in the Lawrence, NJ area before moving to Lambertville 30 years ago. He attended Lawrence High School and was a gifted athlete playing soccer and gymnastics. He served in the US Army during the Viet Nam era. He worked in construction with several local contractors including Frank Carbone, Brian McVey and Doug Oliver. Earlier he managed apartment complexes in Edison, NJ and Lawrence, NJ. Ed enjoyed bowling, shooting pool and watching his favorite sports on television: football, bowling and baseball. He was a member of the Lambertville American Legion Toscani Post.
Ed was a devoted husband to his wife Theresa Catherine Dey; the brother of Carole Caruso and her husband Dan of Hopewell, Dave Rinkus and his wife Janet of Defuniak Springs, FL and Cathy Schultz and her husband Mark of Ewing, NJ; and the brother-in-law of William Dey of Buckingham Springs, PA. He is also survived by several nieces and nephews. Ed was the son of the late John W. and Elnora Marie Yates Rinkus and the brother of the late John Rinkus.
Funeral services will be private.
A memorial celebration will be scheduled for this summer.
Memorial donations may be made to the Lambertville-New Hope Rescue Squad, PO Box 237, Lambertville, NJ 08530.
Arrangements are under the direction of the Van Horn-McDonough Funeral Home, 21 York Street, Lambertville, NJ 08530.

All rights reserved. This obituary is also archived at obittree.com